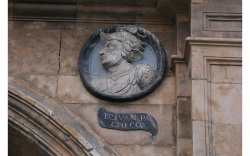 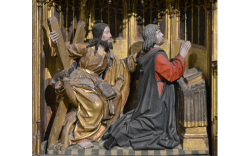 Commerce of works of art - particularly religious art - between the kingdoms of Spain and Flanders dates back to the XIV century as may be seen by documents describing the arrival of shipments of monumental brasses, the first altarpieces of polychrome decorated wood and carved reliefs such as those conserved in Jaca and Sitges today. These initially purely commercial contacts later became increasingly stronger thanks to the policy of alliances and dynastic marriages implemented by the Spanish Monarchs which led to the union of the Low Countries and Castile under a single crown with the albeit brief access to the Castilian crown of Joanna, the Mad (Juana la Loca) and Philip, the Fair (Felipe el Hermoso). The process was consolidated under the Habsburg dynasty beginning with the reign of Charles I (Carlos I).

In this favourable context, government members, ecclesiastic dignitaries and merchants alike travelled frequently to the Low Countries where they had the opportunity of coming into direct contact with one of the most outstanding aesthetic proposals of Western Europe at the end of the Middle Ages: namely, Flemish art.

The decisive factors regarding the introduction of Flemish art into Spain were two-fold: the trade relations derived from the availability of raw materials in our country and our lack of pre-industrial tradition, thereby generating a double demand.

On one hand, this led to unprecedented economic prosperity which, in turn, led to an increased demand for assorted luxury products and works of art from many genres,  such as sumptuous fabrics, illustrated books, brass objects, vignettes, prints and engravings, tapestries, paintings on boards and panels…and, of course, sculpted and carved religious images and altarpieces.

On the other hand, commerce itself provided an answer to this increasing demand by putting potential buyers into contact with a wide choice of suppliers offering works of art of proven quality at competitive prices whilst simultaneously ensuring that the holds of those vessels that had transported outward-bound raw materials were filled with articles made from the same for the return voyage.

Numerous artisans and craftsmen who, thanks to trade networks, now had all the raw materials they needed to manufacture carved and sculpted polychrome altarpieces, gathered together in bustling Flemish cities. They now had oak and walnut with which to manufacture altarpiece frames, or wings used to close and protect the figures and also carve religious figures and reliefs, in addition to having access to a wide variety of pigments and precious metals which they used to decorate and clad the figures, a very characteristic feature of their colourful polychromy.

Given the fact that artisans were well organised into Guilds that established exactly how each of their members had to carry out their tasks in painstaking detail, Flemish workshops were able to create a true industry as far as religious figures and works of art were concerned. Their production was characterised by the outstanding quality of the items manufactured, items which were increasingly appreciated throughout the whole of Europe and which was in tune with the prevailing pious mentality of the period.

In many instances, such as that concerning the Laredo altarpiece, we do not know what kind of customers commissioned and acquired these works of art. We do know, however, that the works were of great interest to all strata of society to a greater or lesser degree.

Generally speaking, the Monarchs' taste was for Flemish art, more particularly for painting on boards and panels and finely-illustrated books. As far as the import of carved altarpieces was concerned, those works commissioned by Henry IV (Enrique IV) for the monastery of San Antonio el Real in Segovia might almost be considered as an exception. However, they do clearly demonstrate the fact that those at the very peak of society of the period also appreciated these fine works of art.

Some of the nobles who held relevant positions at Court and in government such as the Marquis of Villena and Gonzalo González de Illescas, chancellery magistrate of Valladolid, and ecclesiastic dignitaries such as Juan de Beaumont, Prior of the Order of Jerusalem in Pamplona, also decorated their chapels with altarpieces from the Low Countries.

Many merchants, having made their fortunes and eager to show off their newly-acquired social position, did not limit themselves to being mere intermediaries. Copying the examples of people who occupied higher rungs on the social ladder than they did, they would build temples and chapels which they would then lavishly decorate, frequently with Flemish altarpieces. And this is exactly what a merchant from Burgos by the name of García de Salamanca did. In fact, this very merchant appears depicted in a pious stance together with his wife and patron saints in the Santa Cruz relief of the Church of San Lesmes. In this way, merchants sought to redeem their sins and save their souls.

These works of art also decorated the main altarpieces of temples such as the one in Zumaia. Though many works were acquired by religious chapters, others were acquired thanks to the donations of private individuals. Parishioners would also gather together to purchase "worthy" furnishings in consonance with the prevailing artistic style of the moment for the most representative of their parish buildings.