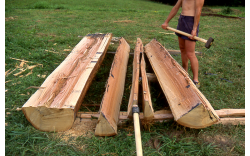 The Trees and the axe Fable. 1479 Steinhowel

For a long time, it was thought that the oak used to make these altarpieces came from local woods and forests. Dozens of different varieties of this species exist however. The English oak (Quercus robur) that grows in the temperate climate of Western Europe has a dense, long-lasting wood that is perfect for manufacturing things, but which is very difficult to carve. Further to the East, however, in regions in which sandy soils and climates favour slower growth, vast forests of Cornish or Durmast white oak (Quercus petraea) were discovered. The wood from this species of oak is soft, easily-worked and very stable. Thus it became the oak preferred by woodcarvers and altarpiece manufacturers.

Thanks to dendrochronology or the method of dating wood by analysing the growth ring pattern, we now know that the oak used in Flanders came from woods and forests in what is now Poland today.

The felling and splitting of tree trunks

In winter, woodcutters in Polish woods and forests would fell oak trees. They worked in groups for several days at a time, often far from their homes. Back then, woodcutters didn't use saws, but very simple, efficient tools such as different types of axes, wooden wedges and large wooden mallets.
Immediately after cutting a tree down, woodsmen would split the trunk between the stump and the branches. To do this, they would insert wedges into the trunk and gradually drive them deeper and deeper using wooden mallets. In this way, trunks were first split in half, then into quarters, then into eighths and sometimes even into sixteenths.
But woodcutters didn't stop there: they also prepared the straightest, knot-free "ready to use" sections of wood from the best trunks which were the sections of wood used by Flemish carvers.

Split wood is easily recognised because its grain presents an irregular appearance.

The different sections of split oak would lie in the woods and forests till Spring, when they were marked for identification. A special tool called a Hoof knife was used to scrape a series of intersecting lines on the barks of the trunks to identify them.

Back then, the ideal method of transport was by water. Every Spring, trunks were grouped together in rafts and despatched to the town of Torun, from where they were floated down the River Vistula to the coast and finally loaded onto ships.

The scratched identification marks allowed identification of the wood and payment of the different lots of oak sections was negotiated and agreed upon during the long voyage of more than 2,000 kilometres.

In every city and town in Flanders, wood craftsmen and artisans banded together in guilds. Each trade (sawyers, carvers, machinists, cabinetmakers and carpenters alike) was governed by numerous rules that stipulated such things as work timetables, days off, wages, the number of workers and apprentices permitted and manufacturing techniques, in addition to the kind of wood each guild specifically worked with and its quality. The people in authority in each guild would mark the wood with hallmarks to guarantee that all stipulations had been correctly adhered to.

A Flemish carpenter or woodcarver would buy the sections of split oak from a wood merchant. In order to turn the pieces of wood into more easily handled planks, they relied upon the sawyers who were the only people allowed to carry out this particular work, which they did by hand. Sawyers were the craftsmen who had all the tools, experience and exclusivity of this particular task.

In their workshops, altarpiece manufacturers in Antwerp and Brussels organised themselves into different specialised trades in order to be able to create these very complex structures. First of all, they made the altarpiece's main body from unglued, assembled and jointed planks of wood, rather like a making a huge wardrobe with protective doors, as it were. Then they would install the openwork and the carved decorative elements framing each scenario.

Carvers created each and every individual figure from solid blocks of wood and then positioned them in groups to create different scenes. Only then could polychrome decorators begin to gild and paint the different pieces. Finally, all the elements making up the altarpiece were nailed securely into place and the last colours were applied and adjusted to unify the overall visual impression of the altarpiece. As a very last step, moveable wings that could be closed to protect the altarpiece and which had been decorated in the painter's workshop were attached.