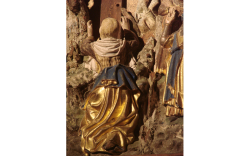 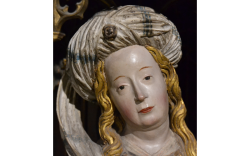 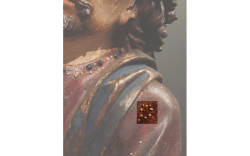 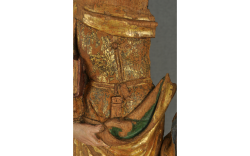 White preparation coat visible in the clothing of one of the figures of The Virgin’s Coronation altarpiece, Errenteria
© Albayalde  CC-BY-NC-ND

Polychrome decoration is the combined number of successively applied layers of decorative techniques to altarpieces and figures alike in order to make them more colourful  and therefore perhaps provide the figures with more expression. Whole teams of highly-specialised artisans and craftsmen carried out the necessary work, starting with the proper preparation of the work undertaken, followed by people who applied gold leaf and gilt and painters who painted the decorative motifs. The entire procedure was accompanied by different phases of assembly and control.

The first step consisted of applying glue and a base coat of primer to the figures. White primer was applied to wood that had been previously impregnated with several coats of glue. In the north of Europe, a mixture of white chalk and animal glue was applied, whilst, in the Iberian Peninsula, Italy and the south of France, something known as "gesso" was normally applied as a base coat of primer.

This first coat was applied thickly in those areas in which metal laminates were later going to be attached and polished and more sparingly where gilt foil and flesh painting was going to be carried out. The layers of decoration were then sanded down using irons, thereby avoiding the appearance of over-bulky figures due to the accumulation of several layers of decoration.

Gold leaf, which was particularly expensive, was applied to most of the surface of Flemish altarpieces. Its lustrous glow, associated with the concept of divinity, was perfectly suited to those illustrated stories with which the church meant to educate the faithful.

Gold and silver gilt, both applied using water, was done by placing the metal laminates or thin sheets of foil on a base of reddish-orange clay, called "bole" which had been mixed with animal glue or diluted egg white. Once securely adhered, the metal surface thus obtained was then polished with a special polishing device such as a piece of agate or a tusk of ivory. Silver was often protected by a slightly-tinted or transparent, completely-smooth coat of paint used to prevent tarnishing and rust.

Matte gold and silver gilt effects were obtained by applying the respective fine metal sheets of foil directly to a mordant or oily adhesive. This type of decoration was often used on small sculpted or carved details whose delicacy had to remain completely unaltered over time.

Different colours were created using pigments manufactured by grinding minerals and colours that were originally vegetable. When mixed with glue, these offered a pure matte aspect. Blue azurite, for example, which was extensively used on Flemish altarpieces, was used mainly to decorate the linings of clothes and for architectural decoration.

When pigments or colours were mixed with linseed oil, on the other hand, then colours such as the reds and greens thus obtained were flatter and more brilliant. Other small details, however, were usually painted in white (coifs), black (edges and borders) and yellow (floors).

In addition to these pure colours, a combination of different colours were also applied, particularly in certain decorations and when painting flesh tones in areas intended to imitate the colour of skin. It was these flesh tones in fact that made the figures appear more human. Curiously enough, more reddish tones were normally used for the "wicked", and lighter tones were used for the "pure". Polychrome decoration applied to eyes, lips, tears and droplets of blood was applied in a particularly meticulous way.

1. Punching is a decorative technique consisting of using different tools to pierce tiny holes of different shapes and sizes in the gilt decoration after it has been polished. The punch work carried out on altarpieces manufactured in Brussels was particularly exquisite, whereas that executed in Antwerp was obviously faster and more mechanical.

2. Metallic applications in the shape of half spheres, fleurs de lis and stars were made of gilt brass and were normally applied to the still-fresh pictoric layer. These ornaments were normally reserved for a series of very high quality altarpieces that were manufactured in Brussels.

1. Applied brocade is a relief decorative technique that imitates sumptuous, gold embroidered fabrics. The technique first appeared around 1420-1430 and remained extremely popular in Europe until approximately 1560. It was used in a large number of altarpieces made in Brussels and some manufactured in Antwerp and Mechelen, a town located halfway between Brussels and Antwerp.

Either a thin (chalk and glue) or thicker (wax and resin) mixture is poured into a mould that has been previously lined with tin foil. Upon de-moulding, the decorative motif thus obtained may be decorated using matte gold or a more colourful finish arranged in juxtaposed rectangular plaques as either individual decorations or as a border.

2. Sgrafitto in Italian means "to scratch". This technique consists of applying layers of colour to metal sheets and then scratching off parts of the layers using a special tool to create contrasting images, patterns and textures revealed by the colour of the underlying metal sheet, underglaze or gold and tin foil. This technique, which was mainly developed in the manufacture of altarpieces in Antwerp and Mechelen, allowed craftsmen to create magnificent decorative effects much faster than when using the applied brocade technique.