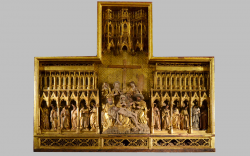 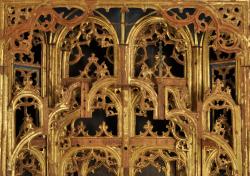 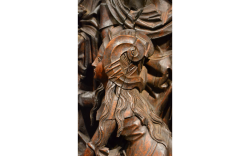 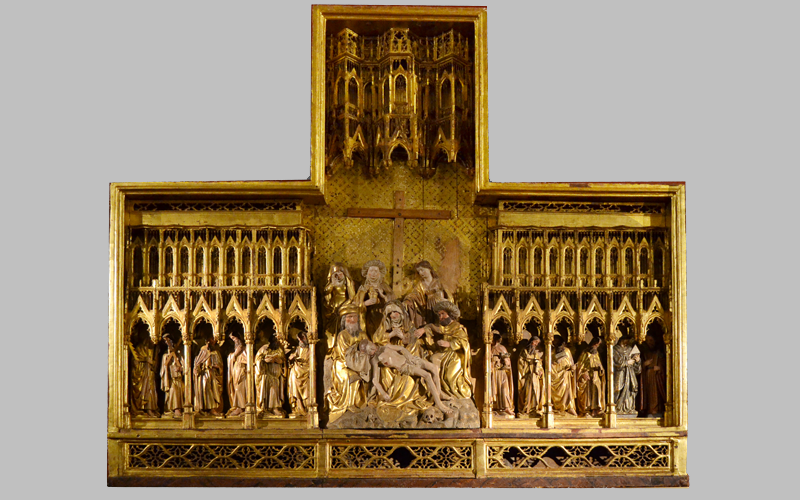 Carved Flemish altarpieces have a wide variety of shapes and designs and may be made up of one or multiple scenes. Over time, their structure, complete with painted and/or carved protective wings, became very complex indeed. But, given the fact that both even the simplest altarpieces and the most elaborately-manufactured ones co-existed at the same period, the task of establishing a clearly-defined evolutionary sequence is understandably a very complicated one.

Altarpieces could be horizontally rectangular in shape, but their usual format was what is known as an inverted "T", whose central body or section is higher than its two lateral ones. Compartments on an altarpiece can be on the same level or distributed over several different levels and are usually framed with either straight or curved borders. This latter is most frequently found in altarpieces manufactured in Antwerp.

Their basic design could be additionally embellished by the use of decorative skirting, something that was characteristic of altarpieces manufactured in Brussels. Small scenarios could also be used to decorate the predella which, though normally limited to the central section of the altarpiece, may also observed in the two lateral sections together with complementary reliefs that were usually inserted in richly decorated architectural canopies or distributed along the sides of the main scenes represented on the altarpiece.

As far as the architecture of each individual compartment on the altarpiece is concerned, the constant quest of craftsmen in search of a way in which to express tri-dimensional space may be clearly observed.  In order to do this, craftsmen strived to use something they themselves defined as "chapel space", which consisted of their copying the interior distribution of a place of worship, although naturally on a much smaller scale, thus evoking a celestial Jerusalem.

Another habitually-used method of craftsmen was to add elements to the lateral wings of an altarpiece so that they would appear to converge towards the rear. They would also add applied traceries imitating the glass windows of chapels which enhanced the sensation of depth even more. Artisans would also frame compartments with spectacular, applied decorations that further enhanced our impression of contemplating the stage of a theatre.

Figures were arranged on different levels as if they stood on terraces of different heights and were placed in different groups, each of which were assembled and joined together as if it were a large, tri-dimensional jigsaw puzzle. The more relevant figures were usually larger and placed to the forefront of the groups, whilst secondary or less important figures were usually smaller and either depicted as stooping or placed to the sides and/or  rear of the main figure. The vast majority of these secondary figures were relegated to more distant and sometimes upper positions on the altarpiece and their size was reduced - occasionally somewhat brusquely - to give the impression of their being even further away from us than they really are.

Occasionally, the ground or floor on which the figures stood would be given a sharp upward slope towards the rear of the compartment so that, albeit in a very simple fashion, it would appear to be further away. Different objects and figures would also be superimposed on different optical planes in an attempt to increase this impression of depth.

As a result, we find that scenes on an altarpiece were originally conceived to be looked at from only one spot: namely, from directly in front of them. Accordingly, very frequently,  the front parts of the figures were only carved in mid-relief, almost always leaving the roughly executed rears of the figures unfinished.

What is more, the actual number of figures present in each of the scenarios increases to such giddy heights as to reach an almost anecdotic extreme, quite independently of whether the scenes were actually mentioned in the Bible, or not. This is exactly what happened with the plethora of figures making up the vast multitude who accompany the Wise Men as they make their way to the stable in the Santibañez-Zarzaguda altarpiece and the throngs of eager people who contemplate the scene of the Holy Nativity on the Sweet Name of Jesus altarpiece in Vitoria.

Occasionally, we can even see how different settings appear in the same relief, such as in the Resurrection of Jesus in Lekeitio, in which the Archangel which appears to deliver  the good tidings to the three Marys standing beside the tomb is placed not to the forefront of the scene, but to the rear.

One of the most distinctive characteristics of Flemish works of art to which these altarpieces belong is the meticulous detail and precision with which a great variety of normal, every-day details are represented.

These details, conveniently updated to the Early Medieval, made it easier for the faithful to recognise characters and episodes from the Scriptures. It was the details that turned these works of art into true illustrations, providing us with exceptionally-detailed information about the clothes and shoes worn, the weapons people used, the different types of period headdresses worn, furniture and even the type of architecture that was fashionable at that period.

The fidelity in the way every-day objects were represented, particularly changes in the way of dress, allow experts to estimate the approximate chronology of these works of art that were almost never documented. With just a little imagination, even the casual observer contemplating the beauty of these altarpieces will be transported back to the Early Middle Ages.