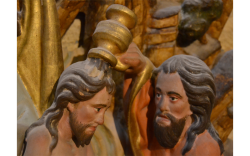 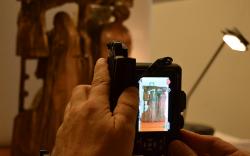 Origin of the altarpieces
© Albayalde  CC-BY-NC-ND

Despite the fact that Spain already had its own tradition regarding this type of work, Flemish altarpieces were particularly appreciated. In actual fact, towards the end of the Middle Ages, Spanish production was renowned for its quantity and outstanding quality all over Europe.

In spite of uncountable losses, disappearances and alterations suffered by altarpieces, today they represent a chapter worthy of consideration within the general panorama of Late Gothic sculpture. Almost fifty examples have survived down to the present, many of them in an albeit fragmented fashion.

Neither is their distribution in time and space constant. Most of the altarpieces date from periods between the years 1430 to 1470 and 1500 to 1520 and the manufacture of altarpieces in series stopped completely in 1558. Amongst those works about which we are sure of their original place of manufacture, not only those examples conserved in the kingdom of Castile predominate, particularly those examples found towards the interior (Valladolid, Burgos and, to a lesser degree, Segovia), but also altarpieces found along the eastern coast of Cantabria. Likewise, Navarre also possesses an outstanding collection of altarpieces. The remaining works are somewhat scattered.

Regarding manufacturing centres, those altarpieces conserved in Spain follow the normal guidelines. Given their chronology, no altarpieces came from Brussels, the city that dominated altarpiece production, till the first third of the XV century. From then onwards, Brussels assumed control of production and, judging by the examples associated with this particular city, almost always by the uncorroborated identification of stamps on the wood, it would seem that the city quickly became the most productive altarpiece manufacturing centre by far.

The clay altarpieces of Utrecht dating from the second half of the XV century are far from numerous, but are extremely important. Their being included in this catalogue meant that we purposely discarded the term "Brabant altarpieces" in favour of "Flemish altarpieces" which, though it too is inaccurate, is perhaps more accepted and consolidated in our particular field. Lastly, Antwerp workshops acquired more protagonism from the year 1500, something that is reflected in the origins of later works. However, the origins of a few works still remain to be established.

Independently of their manufacturing sources, some works display certain peculiarities that could be interpreted as being concessions to local tradition. The co-existence in the same altarpiece of  compartments reserved for reliefs with others for free-standing figures, some of which were occasionally of quite considerable dimensions, such as those seen on the altarpieces of San Salvador in Valladolid and San Lesmes in Burgos, the peculiar way the latter is inserted into the wall, and the presence of vertical spacers on the altarpiece in Rentería, all  represent quite unexpected and even surprising variations when compared to more standardised altarpiece typologies.

Nevertheless, to be perfectly truthful, it should be noted that, generally speaking, these works are not easy to systematize and indeed frequently induce people to think that the exception tends to become the norm. The fact that a great many works have disappeared completely undoubtedly has not only had a great deal to do with this, but has also severely limited our overall appreciation of what the origins of the manufacture of Flemish altarpieces might have really been.

Practically half of all the altarpieces studied conserve their original configuration intact. Some, however, have lost their wings (Las Navas), part of their traceries (Santibañez), individual figures and even complete groups of sculptures (Vitoria and San Juan de Valladolid).

Sometimes the original frame of the altarpiece has disappeared (Lekeitio), has been altered (Rentería) or has been given a predella and/or other additional elements in situ (Belmonte). In the very worst cases, altarpiece architecture is missing from reliefs (Barcelona and Madrid) or has been inserted into later, normally Baroque structures (Laredo and Segovia).

Neither has polychrome decoration stood the test of time. Though some are original and of great quality and beauty (Logroño), others have been re polychrome decorated, occasionally with excellent taste (Cifuentes) whilst other altarpieces have been almost totally stripped of all their polychrome decoration (Barcelona). Later repainting and clumsy maintenance work obfuscate and detract from certain works, completely altering our perception of them.

This catalogue not only gathers widely-scattered information in order to place it at the disposal of anyone interested in this particular field, and indeed specialists themselves, but also contributes several original contributions based on direct, personal observation, particularly concerning our providing a deeper understanding of elaboration processes, the different techniques used in polychrome decoration and even the odd recognition of hitherto unknown stamps and other identification marks.

Along the same lines as other studies dealing with restored works, such as those related to the altarpieces of Las Navas, Vitoria and Rentería, our aim is to offer a multiple approach in which historical, stylistic and iconographic considerations are accompanied by the results of technical and scientific analyses. In this way, we aim to provide a global and more accurate appreciation of the works in the hope that this will stimulate exchanges of information that will, in turn, provide the necessary momentum and stimulate fresh progress in the recognition and appreciation of Flemish altarpieces.